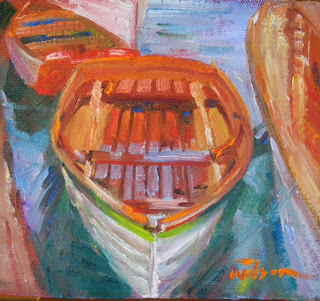 A clinker built dinghy﻿ is a classic. I saw this one at the Classic Boat Festival at the Inner Harbour in Victoria BC recently. Lots of brightwork on all sides.
Posted by Ron Wilson at Monday, October 31, 2011 No comments: 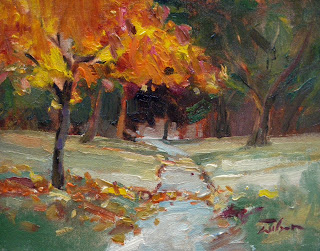 Rain, rain, rain but not a pain because the colours are soft and intense - ideal for painting. This is my favourite tree in the fall, I've painted it at least three times over the years. One can cope with the rain IF... 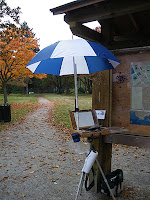 ...if ﻿one can keep one's canvas from the wet drops. This sign board offered some protection and I erected my painting umbrella too. My  blood is still too warm for the cold weather but I dressed in many layers! The oil sketch is available - please check Fine Art America http://ron-wilson.fineartamerica.com/ for the details.
Posted by Ron Wilson at Friday, October 28, 2011 No comments: 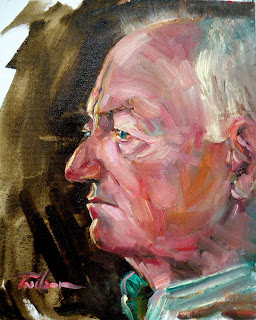 ﻿
Super Frank sat for about a dozen portrait painters at Goward House today. We spoke about how our respective families are blessed with what my folks called 'a Roman nose.' I think it's a sign of nobility but that's just an opinion...﻿ I can quite see this noble Caesar gazing out over his Legions of many soldiers!
Posted by Ron Wilson at Tuesday, October 25, 2011 No comments: 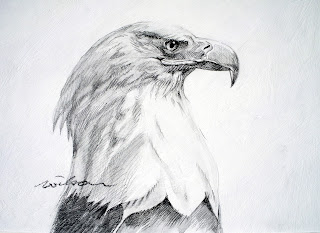 I was supposed to be painting with the ALFS outdoors﻿ this morning but it rained cats and dogs, so I drew indoors instead.
A very patient Tom sat for me. We worked for forty minutes. Anyhow, I like this portrait not because it's good but because I see now that this jerky, rough way of drawing is unique - no one else I know draws like this. The style is mine, I have been doing it like this for thirty years or more - perhaps I'll post an earlier one some time - as a comparison.
I'm glad I have a STYLE  - it's something one cannot force, it just comes with time.

Click Tom's image to see an enlargement,  then (at the top right of the new window) click it off at the X to return here -- please drop me a line (click on "comments" below here) that'll be great!
Thanks,

When Sargent's sitters ever complained about their likenesses (it didn't often happen) he used to tease them by saying "you can always fix it when you get it home..." 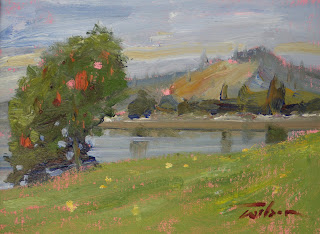 I arrived late for the morning's paint-out with the Al Frescoes. Frank looked at his watch and said that I had 45 minutes to get my work done before Show 'n Tell time at noon!

After a summer break I returned to the Goward House Portrait Painters to find the dozen or so artists in good form. Our sitter today sat very still yet I didn't think I got a good likeness after the three-hour session - you can't win 'em all,  painting is a lot like golf, some times you miss,  some times you are on par.
Anyhow, I was happy with my colors and brushwork even if I wasn't exactly accurate in my portrayal. So I went back after a couple weeks and re-painted her eyes. Still not an exact likeness but more pleasing than my first rendering ... 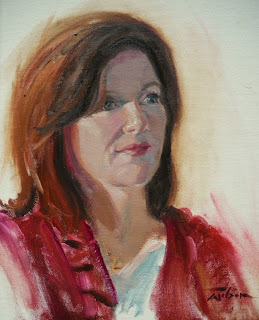 Click the painting for a bigger view.   X it off your screen at rop right when you're done.
﻿
Posted by Ron Wilson at Tuesday, October 11, 2011 No comments: