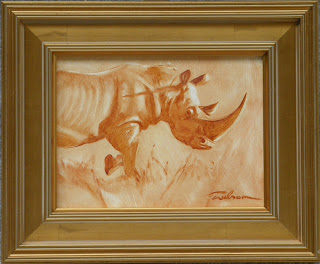 ﻿
Yesterday in Victoria BC﻿ an ancient rhino horn went on auction legally and sold for fourteen thousand dollars.
Here's my monochrome of a rhino emerging from the bush in South Africa where I was born. Horns that pre-date the ban apart, I too am saddened by the reported incidents of current poaching there. A Voice of America reports that poison is being used to protect the rhinos - Game farm owners have been hiring armed security guards to patrol their reserves, which can be a dangerous job. Now, they are trying a new tactic: they poison the rhinos' horns. The rhino is injected with an anaesthetic, so that it's paralyzed but conscious. Then a hole is drilled into its horn, which is injected with a poison that's dyed red. Conservationist Lorinda Hern says the substance is safe for rhinos, but harmful to humans who ingest it. Symptoms include nausea, vomiting, diarrhea, nerve damage and even death in extreme cases. If you buy a horn and it's [a red] kind of color, you obviously know that it's been tampered with and that it's not safe for human consumption. "So, yeah, 60,000 U.S. dollars per kilo versus zero," said Hern, showing how the poison changes the horn’s hue. Once the procedure is complete, the rhino wakes up groggy but unharmed.
My painting is for sale, contact me for the price, free shipping to anywhere in North America, estimates for other countries. Thanks, Ron