Devastation of Rhinos in South Afrca 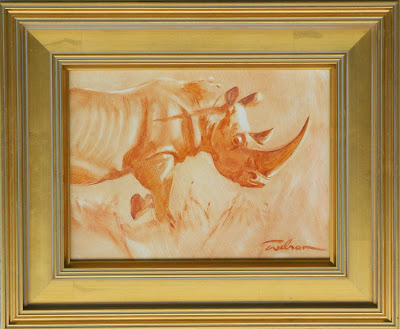 Last night CBC presented a video report on the endangered Rhinos in South Africa, a rhino being slaughtered every 8 hours in the Kruger National Park. The horn can fetch up to $100,000.00

﻿ Recently in Victoria BC﻿ an ancient rhino horn went on auction legally and sold for fourteen thousand dollars. Here's my monochrome of a rhino emerging from the bush in South Africa where I was born. Horns that pre-date the ban apart, I too am saddened by the reported incidents of current poaching there. Voice of America reports that poison is being used to protect the rhinos - Game farm owners have been hiring armed security guards to patrol their reserves, which can be a dangerous job. Now, they are trying a new tactic: they poison the rhinos' horns or ship the animals to a "safe House" at $40, 000 a time.

"Rhino Emerging" by Ron Wilson (oil painting framed 6 x 8). Click the image for a bigger picture. Your COMMENT is encouraged.

I like it, Ron. We always paint better, the things we know well!